The History of Brazilian Jiu Jitsu

The word pankration is a combination of two Greek words, pan, meaning “all,” and kratos or cratos, meaning “strength” or “powers.” 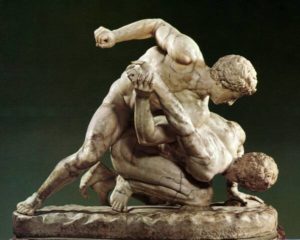 WHAT WAS ANCIENT PANKRATION?
This word is indeed a combination giving an accurate description of the sport. Pankration was a potent mixture of boxing, kicking, chokes, holds, locks, throws, takedowns, and grappling/wrestling. The matches took place in an arena, or “ring”, which the Greeks hoped would encourage close-quarter combat. Common techniques included punches, joint locks, choke holds, elbow and knee strikes, and kicks. Kicks to the legs, groin and stomach were quite commonly used. Standing strikes such as these were common, though the overwhelming majority of bouts were settled on the ground, where submission holds and strikes were both used. Competitors were renowned for their grappling skills, and would employ a variety of grappling techniques often to great effect.

Ancient Greek pankratiasts became heroes, and the subject of numerous myths and legends. Alexander the Great sought out pankratiasts as soldiers because of their legendary skills at unarmed combat. When he invaded India in 326 B.C.E., he had a great number of pankratiasts serving with him. This is believed to be the beginning of Asian martial arts, as most Asian martial arts trace their history to India at around this time.

AFTER THE GREEKS CAME WRESTLING AND BOXING IN THE WEST AND MARTIAL ARTS IN THE EAST?

Following the decline of pankration in Greece, which coincided with the rise of the Roman Empire, mixed martial arts fell by the wayside in favor of other combat sports. Sports such as wrestling and boxing became the dominant forms of combat sport in the West, while traditional martial arts swelled in popularity in Asia.

WHEN DID BRAZILIAN JIU JITSU EMERGE?

The split between east and west with separate development remained the case for centuries until 1925 in Rio de Janeiro, Brazil, when the sport of mixed martial arts experienced a revival.

In order to fully understand the reemergence of mixed martial arts, it is necessary to take a brief look at the history of the Gracie family of Brazil. In 1801, George Gracie immigrated to Brazil from Scotland, and settled in the Para province of northeastern Brazil. His family grew and flourished, and in the early 1900s, a Japanese man named Mitsuyo Maeda immigrated to the same area. The Japanese government had plans to establish a colony in the area, and Maeda was a representative of the Japanese government. He quickly became close friends with Gastão Gracie, a political figure in the area, and grandson of George Gracie. Gastão used his power and influence to assist Maeda and his agenda of establishing a Japanese colony.

Maeda was also famous for another reason, he had been  a renowned champion of the Japanese martial art of Japanese style Jiu-Jitsu. Maeda, or Count Koma, as he was known in Japan, offered to teach Gastão’s son the art. Maeda trained Gustão’s son, Carlos, from the time Carlos was 15 until he was 21, when Maeda returned to Japan. Carlos then began to teach his brothers, Helio, Jorge, Osvaldo and Gastão, Jr. the art as Maeda taught it to him. The Gracie brothers were not bound by the tradition that Japanese practitioners of the art so rigidly upheld, rather the brothers began to adapt the art to suit themselves, and to make it more practical. It was in 1925 that Carlos took his brother Helio to Rio de Janeiro, where they opened a jiu-jitsu academy.

HOW DID THIS LEAD TO MODERN DAY BJJ AND MMA?

As Carlos and Helio continued to advance and perfect their art in their new academy, Carlos came up with a brilliant marketing scheme to draw attention to the fledgling academy. He issued what is now famously known as the Gracie Challenge. As he explained, “I had to do something to shock the people.” He began the Gracie Challenge by taking out an advertisement in several Rio newspapers. The advertisement, which included a picture of the slight Carlos Gracie, information on the academy, and stated “If you want a broken arm, or rib, contact Carlos Gracie at this number.” 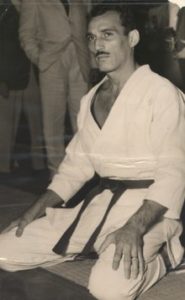 This effectively began the revival of professional mixed martial arts in the Western world, as Carlos, and later his younger brother Helio, and their sons, would take on anyone in vale-tudo matches. These matches closely resembled the Pankration matches of Ancient Greece, and were participated in by representatives of area karate schools, professional boxers, capoeira champions, and various others that wanted to prove that they were better than the Gracies.

DID IT GROW FROM THERE?

As word of this spread through Rio de Janeiro, the public craved these matches. As a result, these matches began to be held in Brazil’s large soccer stadiums, and attracted record crowds. The first of these professional fights was between Brazilian Lightweight Boxing Champion, Antonio Portugal and Carlos’ younger, smaller brother Helio who won the match in less than 30 seconds 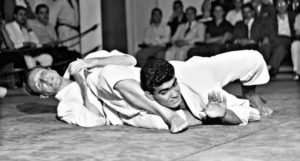 As word of these matches spread to Japan, the great martial arts champions of Japan sought to participate in this new form of competition against the Gracies, who the  Japanese thought were defiling their traditional arts. Japanese champions flocked to Rio de Janeiro to battle with Helio Gracie, who was always outweighed by his opponents, often by more than 100 pounds. He defeated many great Japanese fighters, and in a trip to the United States, Helio defeated the World Freestyle Wrestling Champion, American super heavyweight Fred Ebert. One-hundred-thirty-five pound Helio continued to defend the Gracie name and their martial art from 1935 until 1951, fighting over 1000 fights, until Carlos’ son, Carlson, and later Helio’s sons Rolls, Rickson and Rorion took over the role of family champion in upholding the “Gracie Challenge.”

The new combat sport of vale-tudo fighting became immensely popular, quickly rising to become the second most popular sport, in terms of ticket sales, in Brazil behind soccer. Leagues and organizations were soon formed and events began to be held regularly all over Brazil. As these events, and Brazilian jiu-jitsu grew in popularity in Brazil, the Gracies branched out to the United States.

WHEN DID IT COME TO THE UNITED STATES?

In the early 1980s, Helio’s oldest son Rorion, came to the United States to teach Brazilian, or Gracie jiu-jitsu as he preferred to call it, in California. Like his father and uncle before him, he issued the infamous “Gracie Challenge” in his new home, but added a new twist. Rorion offered $100,000 to anyone who could defeat him, or one of his brothers, in a vale-tudo match. These matches again brought Brazilian jiu-jitsu much popularity. As Rorion realized the potential this style of fighting offered to spread his family’s art, he sought to create an organization that would promote this sort of fighting in the United States.

Ultimate Fighting Championship (or UFC as it is more commonly known), held its first event in 1993 and sold 86,000 pay-per-view buys, and by the third event, the buy rate was up to 300,000 pay-per-view buys per show. This secured a place for the sport of mixed martial arts in the United States, but this place was not a reputable one. However, after years of work from such individuals like Dana White, today the sport is recognized and sanctioned as a home of the most professional and skilled athletes in the world, and has quickly become the fastest growing sport on the planet.

WHO IS UNITED BRAZILIAN JIU JITSU?

United Martial Arts of Katy training in BJJ and TKD is open 6 days a week and offers over 20 classes per week taught by our instructors who are also decorated competitors in their martial arts. Our BJJ and TKD programs and classes provide ever-evolving teaching and support so that our members have the opportunity to achieve and develop their skills to reach their personal goals, whatever they may be – competition, training as a hobby, improving athleticism and health – all while learning the martial arts discipline in Katy, Texas.

We are proud to serve the needs of the community. Our students come from every walk of life and all the surrounding neighborhoods such as Lakes of Buckingham Kelliwood, Kelliwood areas, the villages of the Cinco Ranch area and many other neighborhoods and businesses in the Mason Road, Westgreen Road, Greenhouse Road, and Fry Road area. Our students attend Katy ISD schools such as Memorial Parkway Junior High, Jeanette Hayes Elementary School, Hazel S. Pattison Elementary School, Cinco Ranch High School, Houston Community College Katy (HCC Katy) and even as far away as University of Houston. Many of our students who work in places like Houston Methodist West Hospital or Texas Children’s Hospital West Campus find our convenient class schedule works well with their needs.